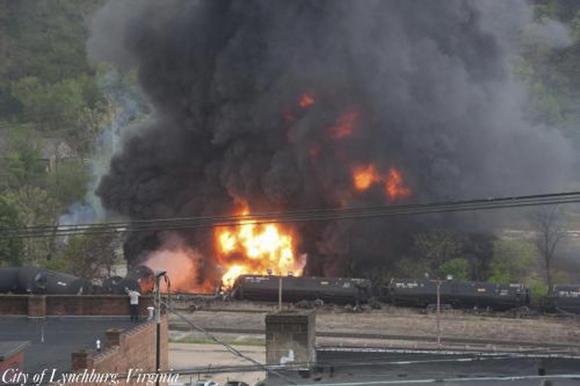 Flames and a large plume of black smoke are shown after a train derailment in this handout photo provided by the City of Lynchburg, Virginia April 30, 2014.

(Reuters) – A CSX Corp train carrying crude oil derailed and burst into flames in downtown Lynchburg, Virginia on Wednesday, spilling oil into the James River and forcing hundreds to evacuate.

In its second oil-train accident this year, CSX said 15 cars on a train traveling from Chicago to Virginia derailed at 2:30 p.m. EDT. Photos and video showed high flames and a large plume of black smoke. Officials said there were no injuries, but 300-350 people were evacuated in a half-mile radius.

City officials instructed motorists and pedestrians to stay away from downtown, while firefighters battled the blaze. Three railcars were still on fire as of 4 p.m., CSX said.

The fiery derailment a short distance from office buildings in the city of 77,000 was sure to bring more calls from environmentalists and activists for stricter regulations of the burgeoning business of shipping crude oil by rail.

JoAnn Martin, the city’s director of communications, said three or four tank cars were leaking, and burning oil was spilling into the river, which runs to Chesapeake Bay. She said firefighters were trying to contain the spill and would probably let the fire burn itself out.

Attorney John Francisco at the firm of Edmunds & Williams, told local TV station WSET 13 he heard a loud noise that sounded like a tornado and then watched as several cars derailed. He said flames streaked as high as the 19th floor of his office building in Lynchburg, the commercial hub of central Virginia.

“The smoke and fire were on a long stretch of the train tracks. The smaller fires died down pretty quickly. You could feel the heat from the fire,” Randy Taylor, who was working downtown when the train derailed, told the station.

The U.S. Department of Transportation said it was sending Federal Railroad Administration inspectors to the scene.

There was no immediate information about the origin of the cargo or the train’s final destination. One of the only oil facilities to the east of Lynchburg is a converted refinery in Yorktown, now a storage depot run by Plains All American. The company did not immediately reply to queries.

It was not clear what had caused the accident or triggered the fire. CSX said it was “responding fully” to the derailment with emergency personnel, safety and environmental experts.

Central Lynchburg General Hospital had not had any injured people brought in from the train derailment, spokeswoman Diane Riley said.

Several trains carrying crude have derailed over the past year. Last July, a runaway train in Lac-Megantic, Quebec, derailed and exploded, killing 47 people. Another CSX train carrying crude oil derailed in Philadelphia in January, nearly toppling over a bridge.

“With this event, regulators could try to expedite the process, and they’ll likely err on the side of the more costly safety requirements in order to reduce the risk of these accidents in the future,” said Michael Cohen, vice president for research at Barclays in New York.

Tougher rules could drive up costs for firms that lease tank cars and ship oil from the remote Bakken shale of North Dakota, which relies heavily on trains. It could also boost business for companies that manufacture new cars, such as Greenbrier Companies and Trinity Industries.

Oil trains rolling across the country, often a mile long, have sparked concern in local communities, particularly in New York and the Pacific Northwest. Derailments have occurred in places as far removed as Alberta and Quebec in Canada, and North Dakota and Alabama in the United States.

In Virginia, environmental groups including the Sierra Club and the Chesapeake Bay Foundation have opposed expansion of crude-by-rail shipments through the region to the Yorktown terminal, which can handle 140,000 barrels per day. CSX’s route through populated areas like Lynchburg and the proximity to the James River have been mentioned as special concerns.

“Whenever oil is handled around water, a percentage of it gets into the water. This derailment is of major concern to us,” said William Baker, President Chesapeake Bay Foundation. City officials said there was no impact on drinking water.

CSX has been positioning itself to deliver more crude to East Coast refineries and terminals. In January, Chief Executive Officer Michael Ward told analysts the company planned to boost crude-by-rail shipments by 50 percent this year.

At the time, Ward said that Jacksonville, Florida-based railroad was working with U.S. regulators to address safety concerns in light of recent derailments and fires.