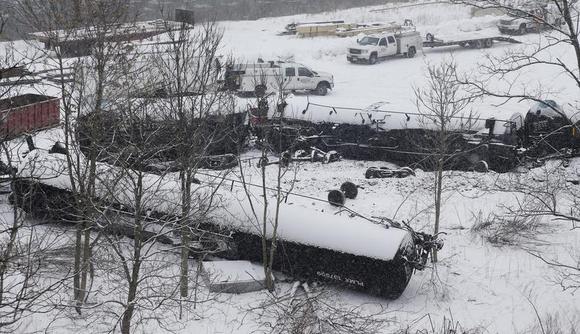 The wreckage of a train derailment is seen in the snow near Vandergrift, Pennsylvania February 13, 2014.  Credit: Reuters/Jason Cohn
NEW YORK (Reuters) – A 120-car Norfolk Southern Corp train carrying heavy Canadian crude oil derailed and spilled in western Pennsylvania on Thursday, adding to a string of recent accidents that have prompted calls for stronger safety standards.

There were no reports of injury or fire after 21 tank cars came off the track and crashed into a nearby industrial building at a bend by the Kiskiminetas River in the town of Vandergrift.

Nineteen of the derailed cars were carrying oil, four of which spilled between 3,000 and 4,000 gallons of oil, Norfolk Southern said. The leaks have since been plugged. The two other derailed tank cars held liquefied petroleum gas.

The train, which originated in Chicago, was destined for an asphalt plant in Paulsboro, New Jersey, owned by NuStar, a NuStar spokeswoman said.

The clean-up was under way on Thursday as a heavy winter storm gathered pace, leaving about 4 inches of snow on the ground by midday Thursday. An investigator from the Federal Railroad Administration was en route to the scene, the railroad regulator said.

“I heard a strange noise, a hollow, screeching sound,” said Ray Cochran, who watched the train derail from his home on a hill above the tracks. “I looked out the window and saw three or four tankers turn over and one of them ran into the building.”

The train, which was also carrying food products, crashed into a track-side building owned by MSI Corporation that makes metal products.

All employees had been accounted for, said Sandy Smythe, a public information officer with Westmoreland County’s public safety department, which includes Vandergrift borough.

Thursday’s accident is the latest in a spate of crude oil train derailments that has prompted calls for more stringent rules regulating crude by rail, shipments of which have soared in recent years as pipelines fail to keep up with growing supply.

It comes ahead of a Senate hearing concerning the safety of transporting crude by rail, which has become a major political issue as the incidents pile up. The hearing was scheduled for Thursday, but was delayed by the snow.

Thursday’s accident was the second in less than a month in Pennsylvania. A train hauling crude on a CSX Corp railroad jumped the tracks and nearly toppled over a bridge in Philadelphia on January 20. There were no injuries or fire in that incident.

A train carrying Bakken oil from North Dakota last July derailed and exploded in Lac-Megantic, Quebec, killing 47 people and decimating much of the small town.

U.S. and Canadian railroad companies, tank car owners and regulators are investigating ways to transport crude on the rails more safely. Much of the focus is on phasing out older tank cars, known as DOT-111s, that do not meet the latest safety standards.

DOT-111s built before 2011 are prone to puncture and fire during accidents, regulators say.

It is as yet unclear what type of cars were involved in Thursday’s accident.