Why The Bakken May Not Come Back

The Bakken shale is already declining because of financial struggles and the oil market downturn, but the potential shuttering of the Dakota Access pipeline could close off the possibility of a rebound.

The 570,000-barrel-per-day oil pipeline carries Bakken oil to the Midwest. On Monday, a federal judge ordered the pipeline to shut down within 30 days after vacating authorization for the project. Energy Transfer immediately appealed for a “provisional stay,” but on Tuesday, U.S. District Court Judge James Boasberg shot down that request.

Energy Transfer will still file a conventional appeal to stay the judge’s order, and surely the company will follow through on that as quick as possible. But it’s not clear how quickly the judge will respond to that; meanwhile he ordered Dakota Access to be drained by August 5.

Even if a stay is granted, the pause could be “short-lived,” ClearView Energy Partners wrote in a note to clients. The firm cited a separate case involving an electric transmission line that resulted in the Army Corps of Engineers being forced to undertake an environmental impact statement after the project was completed.

“Put another way, even conservative jurists can back a court ruling that finds agency environmental reviews flawed and should be suspended while redone,” ClearView Energy Partners wrote. “[T]he horizon for Dakota Access may be darkening,” the firm added.

Assuming that Dakota Access goes offline and undergoes an environmental assessment, which could take the better part of a year, the process will drag on into a potential Joe Biden administration. At that point, the Army Corps, under a new direction, may change its stance, killing off the pipeline.

Time will tell, but in the interim, the temporary closure is an enormous victory for the Standing Rock Sioux Tribe. “This pipeline should have never been built here. We told them that from the beginning,” the Tribe’s Chairperson Mike Faith said.Related: China Inks Military Deal With Iran Under Secretive 25-Year Plan

If Dakota Access is forced to shut down for good, it could head off any hopes on the part of the oil industry to revive production in the Bakken. Without the pipeline, a large portion of Bakken production would need to return to the practice of moving large volumes by rail.

“I think everybody is forming their game plan now, and if they have tank cars, they’re probably thanking their lucky stars,” one source familiar with Bakken rail operations told Reuters.

However, a sudden rush of shipping oil-by-rail will increase the risk of derailments and explosions. Early on in the Bakken shale boom, it was all too common for oil trains to derail and explode, earning them the nickname of “bomb trains.” A return of oil train shipments would increase safety risks.

Meanwhile, because putting oil on rail is more costly, Bakken crude would need to be discounted for the process to make sense.

Already, the region is seeing a larger discount. Shortly after the court decision ordering Dakota Access to shut down, the price of Bakken oil at the hub of Clearbrook, Minnesota declined. Relative to WTI, the discount widened from $1.15 per barrel to $2.75 per barrel, according to Bloomberg, which was the largest markdown since May.Related: The Death Of The $2 Trillion Auto Industry Will Come Sooner Than Expected

The Bakken was already slowing down before the pandemic. Years of red ink from shale drillers soured investors on the whole fracking enterprise, but that is particularly true in the Bakken. For example, Continental Resources, which has a prominent presence in the Bakken, saw its stock price fall in half between late 2018 and late 2019.

Bakken production hit a peak in October and November of last year at just over 1.5 million barrels per day (mb/d), before declining to 1.43 mb/d in February, just before the global pandemic rocked the market.

Because the North Dakota region has much less storage capacity than Texas and Oklahoma, Bakken drillers were immediately squeezed when the market went into a tailspin, forcing them to shut in thousands of wells. The EIA expects production from the Bakken to dip below 1 mb/d in July.

A source at one unnamed Bakken oil producer said that the region’s total production will need to decline to 950,000 bpd in August if Dakota Access shuts down. At the start of this week, Continental’s share price is off by more than 15 percent, a reflection of the negative impact of the DAPL shutdown.

“Production of crude oil is going to be landlocked in North Dakota,” Sandy Fielden, director of oil and products research at Morningstar, told Reuters. “It’s going to be congested and that’s going to cause discounts in the price of Bakken crude to WTI.”

Four reasons why people are outraged.

It took seven years of protests, sit-ins, letter writing, and, finally, a presidential review to prevent the Keystone XL oil pipeline from being built. Now, in a matter of months, America’s newest mega-pipeline—the Dakota Access Pipeline Project (DAPL)—has quietly received full regulatory permission to begin construction. Known also as the Bakken Pipeline, the project is slated to run 1,172 miles of 30-inch diameter pipe from North Dakota’s northwest Bakken region down to a market hub outside Patoka, Illinois, where it will join extant pipelines and travel onward to refineries and markets in the Gulf and on the East Coast. If that description gives you déjà vu, it should: The Bakken Pipeline is only seven miles shorter than Keystone’s proposed length.

The $3.78 billion project is being built by Dakota Access, LLC, a unit of the Texas-based Energy Transfer Partners. (Former Texas Gov. Rick Perry, a friend of Iowa Gov. Terry Branstad, sits on ETP’s board.) According to the firm, the Bakken Pipeline will transport up to 570,000 barrels of crude oil per day. Advocates have celebrated the supposed 12,000 jobs the pipeline will create in construction, while repeating calls to end American dependence on foreign oil—a platform called into question by new laws allowing US producers to export crude. The US Army Corps of Engineers gave its blessing at the end of July, clearing the final hurdle for the massive infrastructure project, which is slated to be operational by the fourth quarter of 2016.

Though the project hasn’t gotten too much national media attention, there’s been plenty of local opposition. Groups like the Bakken Pipeline Resistance Coalition, a collective of 30-plus environmentalists’ and landowners’ associations, along with Native American groups, have cried foul. Here are the four things they’re most outraged by:

How many jobs…really: According to Dakota Access’s DAPL fact sheet, the pipeline will create 8,000 to 12,000 construction jobs. An earlier draft of those figures claimed 7,263 “job-years” to be created in Iowa alone. Not so fast, says professor David Swenson, associate scientist in the Department of Economics at Iowa State University. Swenson crunched the numbers himself and came to a much more modest conclusion: 1,500 jobs total per year in Iowa for the course of construction. And given that most of these jobs are skilled, Swenson expects many of the hires will be from out of state, as Iowan contractors specializing in large-scale underground pipe-fitting and welding are scarce. The long-term forecast for job creation is even bleaker. The Des Moines Register reports that there will only be 12 to 15 permanent employees once the pipeline is completed. (DAPL has since walked back its job estimate slightly.)

Spill, baby, spill: As Sierra Club’s Michael Brune puts it, “It’s not a question if a pipeline will malfunction, but rather a question of when.” And, though they spill less often than trains do, the International Energy Agency found that pipelines spill much more in terms of volume—three times as much between 2004 and 2012. The Bakken Pipeline’s route takes it through active farmland, forests, and across the heartland’s major rivers: The Big Sioux, the Missouri, and the Mississippi, some with multiple crossings, though the US Fish and Wildlife Service claims that no “critical habitat” is endangered. It also runs through sacred Native American lands (more on this below).

Enbridge Inc., a stakeholder in the Bakken pipeline, has a speckled track record on spills. In 2010, an Enbridge pipeline spilled 1.2 million gallons of crude into the Kalamazoo River, one of the worst inland spills in American history. Because the pipeline qualifies as a utility (despite being privately owned and for-profit), the Army Corps of Engineers was able to certify it without performing an environmental impact statement, as all utilities projects qualify as “minimal impact.” These projects are subject to environmental assessments every five years.

Don’t tread on me: Private property owners, particularly in Iowa, have bristled at the Bakken Pipeline’s expropriation of land. ETP asked the Iowa Utilities Board to grant it the powers of eminent domain, the process by which a government can repossess private property for public use even if the private property owner does not voluntarily sell. The IUB, a three-person committee appointed by Republican Gov. Terry Branstad, granted ETP that right for its for-profit private pipeline, a practice that is not uncommon, in order to purchase 475 parcels from resistant landowners. This has led to numerous pending lawsuits, with the Des Moines Register reporting that the issue may make it all the way to the Iowa Supreme Court. In May 2015, ETP was embroiled in scandal after a contracted land agent, working on behalf of the Bakken Pipeline, allegedly offered an Iowan landowner a teenage prostitute in exchange for voluntary access to his property. (No charges were brought after the Iowa Department of Criminal Investigation determined that the case did not meet the legal standard for pimping, solicitation, or conspiracy.)

DisRezpect: The pipeline will cross through sacred lands and pass under the Missouri River twice. For the Standing Rock Sioux, the Missouri provides drinking water and irrigation, while its riverbanks grow innumerable plants of cultural import, including sage and buffalo berries. The tribe launched a campaign called “Rezpect Our Water” and staged a 500-mile relay race in protest, hoping to sway the Army Corps of Engineers in the permitting process. Last weekend, a group of 30 Native youth completed a three-week run from North Dakota to Washington, DC, where they delivered a petition of 160,000 signatures opposing the pipeline’s construction.

Now, even though the Corps has given the go-ahead, the tribe has not given up the fight. They recently filed suit against the Corps in federal court. The suit seeks an injunction, asserting that the pipeline will “damage and destroy sites of great historic, religious, and cultural significance,” a violation of the National Historic Preservation Act.

Though the pipeline seems to be a done deal, resistance of all types continues. Last week, the Des Moines Register reported that authorities are investigating suspected arson against the ETP’s heavy machinery. The fires, three separate incidents across two Iowa counties, resulted in nearly $1 million in damage to bulldozers and backhoes. The acts appeared to be intentional incidents of monkeywrenching.

On Thursday, a group of protesters, including the Standing Rock Sioux and their allies, gathered in North Dakota to oppose the pipeline, blocking the construction site. The police ultimately broke up the demonstration, resulting in at least five arrests. 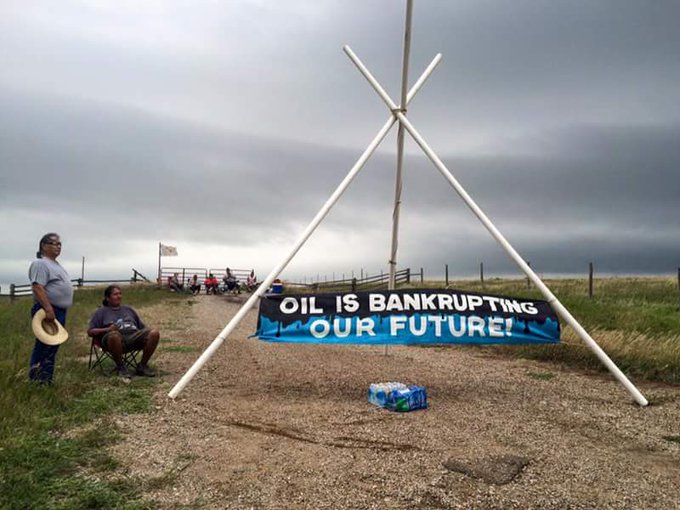 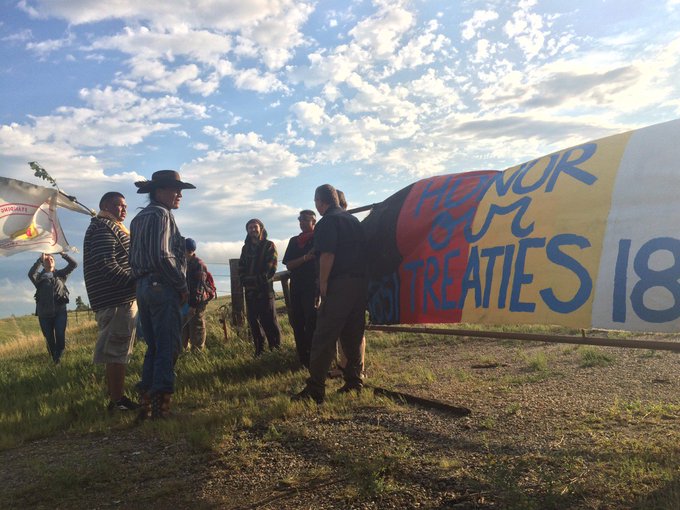