On Thursday, January 28, 2016, Benicia staff released the agenda for the upcoming Planning Commission final hearings on Valero Crude by Rail.  Included along with the agenda was a 41-page staff report recommending approval of the project, and outlining a new sign-up procedure for those who want to comment at the public hearing.

Like the massive 3-volume Final Draft of the EIR, city staff chose to ignore critical input and to hide behind “federal preemption” in order to cater to the desires of our giant corporate neighbor, Valero.

Benicia residents are sorely disappointed with the decision of our city employees to disregard the health and safety of Benicians and others uprail in Davis, Sacramento and beyond.

The staff recommendation relies on the very same reasoning used by San Luis Obispo County staff to DENY a crude by rail project: what happens uprail can’t be controlled.  Because we can’t control Union Pacific, because only the Feds can have a say about rail shipping beyond local jurisdictions, we throw up our hands, while San Luis Obispo staff says, basically, ok, we’re not helpless, we can stop it HERE.

UPDATE: On Feb. 2, the City released a revised version of the procedures for signup, indicating that YOU MAY PHONE THE PLANNING DEPARTMENT AT 707-746-4280 IF IT IS NOT POSSIBLE TO SIGN UP IN PERSON.  You may also sign up another person who is unable to sign up in person.

This is SO discouraging.  It’s tempting to throw up our hands in defeat … but not yet.  We have two more opportunities to make our wishes known:

2. THE FINAL PLANNING COMMISSION HEARING (Commissioners will VOTE after all are heard!)

Where:   Benicia City Council Chambers | 250 East L St. Benicia
When:     Feb. 8, gather at 5:00pm, hearings start 6:30pm
RSVP:      bit.ly/SafeBenicia
PETITION:  Over 1300 of you have already signed the Safe Benicia petition.  If you have not yet signed, please do so now.  Go to bit.ly/StopValeroOilTrains.  Add your personal comments or just push the button.
AGENDA: click here
STAFF REPORT (with recommendation for APPROVAL): click here
Note also:  Additional meetings are scheduled to hear public comment on Tuesday, February 9, Wednesday, February 10, and Thursday, February 11, 2016. These meetings will be held only as needed. If all public comment is provided and the Planning Commission takes action, the agenda item will be closed and the additional meeting(s) will be cancelled.
IF YOU WISH TO COMMENT DURING THE HEARING: Due to the large amount of public interest with this project, the City will be instituting a sign up system in order to speak during the public hearings. Interested members of the public will be allowed to speak in order of sign up. Sign ups will be available on the day of the meeting(s) from 8:30 a.m. to 12:00 p.m. and 1:00 p.m. to 5:00 p.m. at the Community Development Department, 250 East L Street, Benicia. At the  hearing, please go to the sign up table just outside of the Council Chambers. Your name will be called in the order in which you signed up. You do not have to sign up in order to speak.  However, you will not be called on until those who have signed up have spoken. In order to accommodate the public, we have arranged for overflow rooms in City Hall with the hearing streaming for you to view and listen. You can also view the event live from the City’s website. http://www.ci.benicia.ca.us/index.asp?Type=B_BASIC&SEC={FD712CCF-B69D-4DE4-B704-CD9E825B3187}

Over 1300 of you have already signed the Safe Benicia petition.  If you have not yet signed, please do so now.  Fill in your info below. Then add a comment or just click on ADD YOUR NAME at the bottom.

Repost from the Contra Costa Times
[Editor: Significant quote: “‘…if they didn’t set those handbrakes before they decoupled those eight, they could start rolling. And that looks like what happened,’ said Randy Sawyer, Contra Costa county’s chief environmental health and hazardous materials officer.”  – RS] 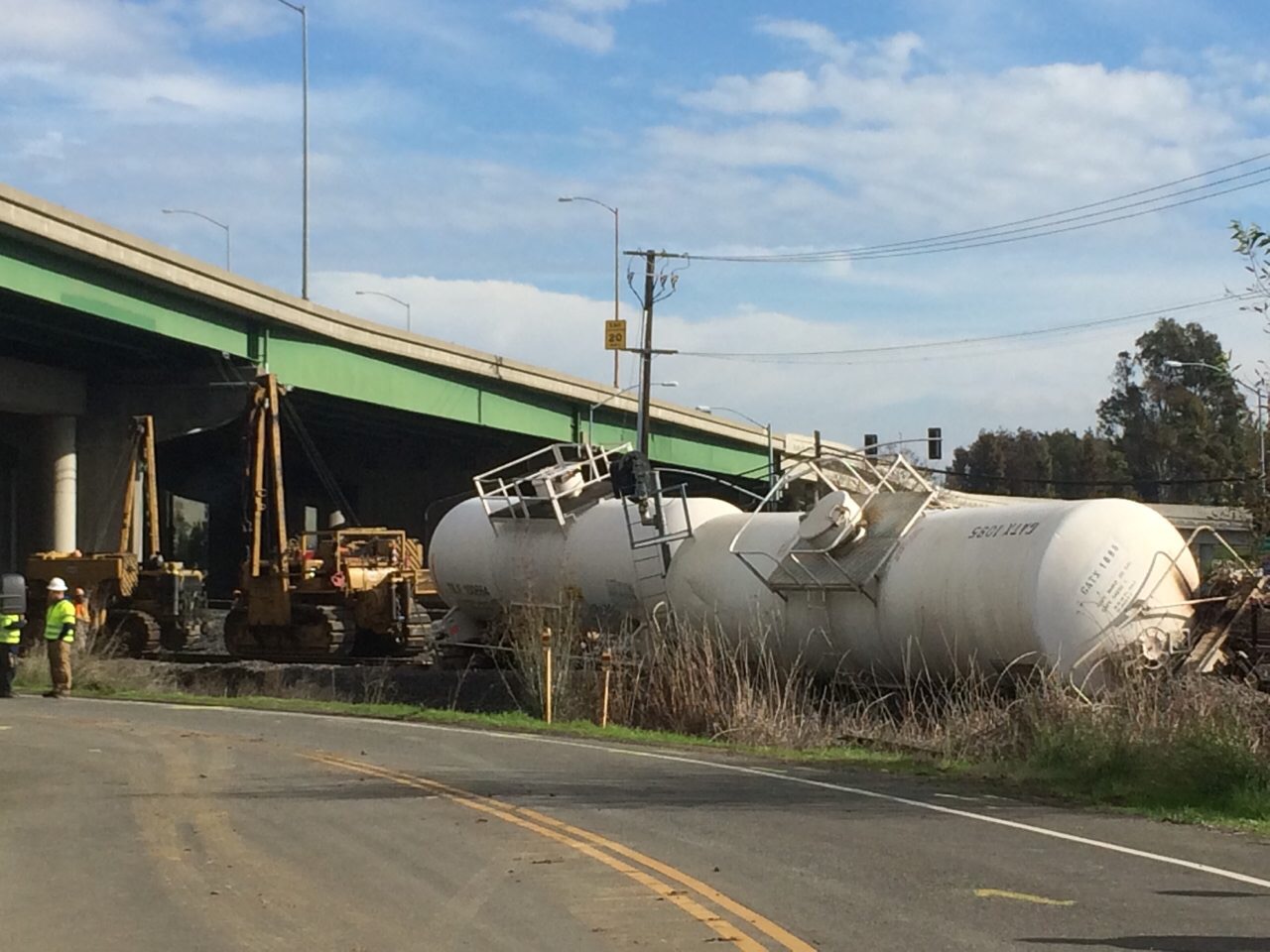 Update, 3 p.m. Thursday: The company handling three tanker cars that derailed in Martinez last week failed to apply enough brakes, according to a report that Union Pacific filed with the Federal Railroad Administration.

When the firm, Eco Services, pulled eight cars into its plant near the Benicia Bridge last Wednesday, a dozen other cars they were separated from began rolling away and under Interstate 680.

“There’s handbrakes on the cars to keep the cars stationary, and if they didn’t set those handbrakes before they decoupled those eight, they could start rolling. And that looks like what happened,” said Randy Sawyer, Contra Costa county’s chief environmental health and hazardous materials officer. “It is a cause for concern.”

The Union Pacific report also found that the incident caused more than $13,000 in damage.

Eco Services, Union Pacific and the Federal Railroad Administration have yet to comment.

The CPUC’s probe of the incident just south of the Benicia Bridge comes amid new disclosures that the company in charge of the train at the time lost control of a dozen cars carrying spent sulfuric acid just before the derailment.

And county officials say the local agency in charge of responding to hazardous material incidents was not notified about the derailment until two hours after the cars left the tracks.

The company that was handling the material was Eco Services. Union Pacific delivered 20 tanker cars to the firm’s plant in Martinez on Jan. 19.

Early the next morning Eco Services workers began moving eight of the cars into its processing facility, according to a company incident report filed with county officials this week.

“As soon as the separation took place, the remaining 12 cars started rolling southward and down gradient toward Marina Vista Ave[nue],” wrote Anthony Koo, a senior environmental engineer at Eco Services.

The fact that a dozen rail cars carrying chemicals were briefly out of control near a busy freeway, Interstate 680, and one of the region’s major bridges prompted concern from the county’s chief environmental health and hazardous materials officer, Randy Sawyer.

The tanker cars “were moving when they weren’t supposed to be moving,” Sawyer said in an interview. “I would think they would have some kind of braking system that would keep them from doing that.”

According to the report, the three cars that left the tracks first passed under the I-680 overpass before hitting a derail device just west of the structure.

Sawyer said that device is a safety feature designed to prevent rail cars from entering a main track and colliding with a moving train. That safety system worked. No chemicals leaked from the three derailed cars, and no one was injured.

Sawyer also expressed concern about the delay in notifying his agency — a process that took nearly two hours.

“We would expect notification sooner,” he said.

According to the Eco Services report, the derailment occurred at 6:45 a.m. on Jan. 20. The company says it notified Union Pacific 17 minutes later.

Sawyer said the rail company then contacted the Governor’s Office of Emergency Services, which then sent the county an email about the incident at 8:33 a.m.

Eco Services said it made a “courtesy call” to the hazardous materials program just over an hour after that.

The delayed notification was most likely because no hazardous materials spilled, but “they did not notify us as quickly as we would have wished,” Sawyer said.

The CPUC, meanwhile, is looking into whether Eco Services or Union Pacific were following state regulations at the time of the derailment, that agency’s spokeswoman, Constance Gordon, said in an email.

A Union Pacific spokesman says the company will cooperate with the CPUC in its investigation.

From an email by Ethan Buckner of ForestEthics
[Editor:  Here is the San Luis Obispo County staff document, “Findings for Denial.” This and more documents can be found on the County’s website.  See also Ethan’s update: “SLO County Staff Tells County to DENY Phillips 66 Oil Train Terminal” with info on how YOU can attend the hearings in San Luis Obispo.  – RS]

Extraordinary news this afternoon out of San Luis Obispo, California, where Phillips 66 proposed to build an oil trains terminal at its refinery on the Nipomo Mesa.

Ahead of critical county Planning Commission hearings on the project, the SLO County Planning Department released their staff report recommending denial of the project. This document is pretty unprecedented from municipal or county planning staff, who in most cases serve as conduits for industry and placaters of public concern. This document reflects a bold assertion of principles of public health, safety, and climate protection over corporate profit. At the bottom of the email, I’ve pasted the main arguments the county is using to recommend denial.

Come hearing time on February 4 and 5, local activists and allies across California will converge on SLO to make sure that Planning Commissioners listen to their own experts and overwhelming public opposition and stamp in this project’s denial. For those of you able to join us in SLO, here’s some info on transportation to the hearings & rally.

The Planning Department’s recommendations do not come out of nowhere. Over the past two years grassroots activists in SLO and beyond have catalyzed a powerful campaign that’s engaged thousands of Californians and enrolled dozens upon dozens of cities, counties, school boards, unions, and campuses to pressure SLO County to deny this project. This recommendation is an affirmation of our collective power.

Many thanks for all your tireless work, and hope to see you in SLO on February 4 and 5!

1. The Department of Planning and Building has found the Project to be inconsistent with several goals and policies of the following plans:

a. Coastal Zone Framework for Planning

2. The Project would be detrimental to the health, safety and welfare of the public and the residents of San Luis Obispo County due to the increase of hazardous accidents as a result of the Project.

3. The Project includes a significant and unavoidable environmental impact with regards to cancer risk (air quality) for the population near the proposed rail spur.

4. The Project includes a significant and unavoidable environmental impact with regards to diesel particulate matter (air quality) due to an exceedance of the SLOCAPCD CEQA threshold.

5. The Project would result in 10 significant and unavoidable environmental impacts (agricultural resources, four which are air quality, biological, cultural, hazards, public services, and water resources), with regards to the mainline rail operations within the County as a result of the Project. Planning Commission Development Plan/Coastal Development Permit #DRC2012-00095 / Phillips 66 Company Page 6

6. The Project would result in 10 significant and unavoidable environmental impacts (agricultural resources, four which are air quality, biological, cultural, hazards, public services, and water resources), with regards to the mainline rail operations beyond San Luis Obispo County and throughout the State.

7. There is a lack of specific overriding economic, legal, social, technological, or other benefits of the Project that outweigh the significant effects on the environment, as would be required to approve the Project pursuant to Public Resources Code section 21081.