Repost from Shale Plays Media
[Editor: Significant quote: “In the last five years, 99 trains have derailed in Alberta alone, and Canada has collectively seen over 400 in the same period.”  See chart below with details for all Canadian provinces.  – RS]

A train derailed in Canada over the holiday weekend, pushing seven rail cars into a nearby creek. Although there was no volatile cargo to cause a flashback to Lac-Megantic, the train was carrying coal ash, which was spilled into the surrounding area.

The Canadian Pacific train derailed on December 26 at about 2 a.m. in Alberta near Banff National Park. A total of fifteen cars exited the track, seven of which were pushed into nearby 40 Mile Creek. Six cars were carrying fly ash, which is a byproduct of coal-fired power plants and an ingredient in cement. The train was also carrying lentils. Both the fly ash and the Mediterranean grain were spilled into 40 Mile Creek.

Repair efforts for the track are already underway, as well as an investigation by the Transportation Safety Board. Officials are unsure what caused the derailment, and workers were quick to the scene in attempts to minimalize its environmental impact. After the spill, workers observed that the creek, which is usually clear, was ruddy and brown. Although officials have stated that the stream is currently unharmed by the spill, ThinkProgress reports that it could be more impactful than it seems.

The creek is downstream of Banff’s Bow River, but so far, officials say the spill isn’t affecting the river. However, the fly ash could ultimately alter the pH of the water and can create piles of sediment in the creek. It could also threaten the health of the creek’s fish, according to University of Alberta ecology professor David Schindler, because of the traces of metals it contains.

Environmentalists are concerned that these sediments could interfere with spawning habitats, even though the substance isn’t classified as dangerous under Canada’s Dangerous Goods Act. According to CBC News, large amounts of sediment in the water could prevent fish eggs from getting the proper amount of oxygen and the creek bed.

The lentils could also have a negative impact on the region. According to the Calgary Herald, the grain could draw bears into an unsafe territory. However, because most bears are in hibernation this time of year, experts say the immediate risk is minimal. The bigger concern is cleaning the lentils up before the bears in the area come out of hibernation to ensure it doesn’t draw them into danger.

The derailment has raised the already heightened concern that transporting certain goods by rail is dangerous. Rail is the primary means of transporting crude oil when pipelines are unavailable, and everyone fears more catastrophes like the explosion in Lac-Megantic, Quebec, which killed some 30 people, and the disaster in Casselton, North Dakota, which brought the dangers of oil-by-rail close to home for many in the state. In the last five years, 99 trains have derailed in Alberta alone, and Canada has collectively seen over 400 in the same period. Across North America, citizens hope to avoid another calamity while officials work to come up with a viable solution. 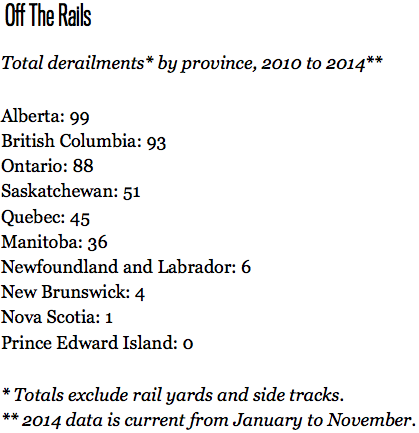